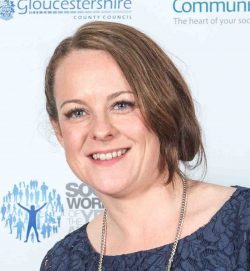 Kirsty, first as a team manager and then as group manager for learning disabilities and older people’s mental health, has had a transformational impact on adult services in Calderdale.

Under her leadership the council has seen the lowest ever number of adults with learning disabilities and older people with mental health support needs living in care homes. The latter team used to place nine people per quarter into care homes, which dropped to one or two once she was in post – and most recently no placements have been made.

Such statistics stem from Kirsty’s relentless human rights focus. Social workers in her teams are expected to enable risk and work to promote positive life choices. Within those teams, there’s a policy of employing NQSWs and supporting their development – the palliative care service she set up, for example, was built around a team of four NQSWs.

But Kirsty’s nomination as a “quiet radical” was also founded on her commitment to integration in its broadest sense – with the NHS, the voluntary sector, family and carer groups and advocacy providers. In the near future, her teams will be based in a shop in Halifax, run jointly with people who use their services.

Gaining respect and co-operation from external partnerships to as high a level as Kirsty takes an enormous amount of tenacity, diplomacy and negotiation. Amazing sustained effort and success!

She is phenomenal – a quiet radical.

Kirsty really understands integration. It’s more than services coming together under one organisation, it’s how we properly integrate good quality, valued support around the person, with the person as the decision maker. Kirsty really gets that and in all my dealings with her social workers it is clear that they do too. She is genuinely inspirational.

I am particularly proud that under her leadership we have seen the lowest ever number of adults with a learning disability and older people with mental health support needs living in care homes. This is an outstanding achievement but then Kirsty is an outstanding social work leader!