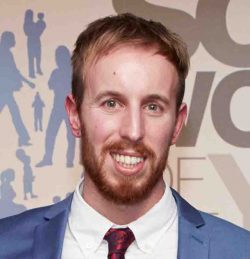 Jamie’s nomination form set out clearly his ability to deal with complex cases, respect for citizens’ independence and consistent consideration of their human rights. Testimonies from the families of several older people he has worked with served to underline these qualities.

One case where a man, ‘Albert’, was distressed because of the possibility his son may be mismanaging his finances, stood out. Jamie acted tactfully and proportionately in determining how best to proceed. Having assessed Albert’s as lacking capacity, Jamie ensured he was empowered through the support of an independent mental capacity advocate, and kept him informed as to what was happening in relation to his finances.

Colleagues speak of Jamie’s thoughtful approach to these tricky cases, the way in which dealing with them has helped him grow as a social worker, and his perfectionism. His practice educator praised his ability to “use professional assertiveness to challenge decisions, stand up to other professionals, and give difficult messages to citizens”.

But Jamie’s value within the team is also based on the way he makes time to help others by talking over difficult situations. The judging panel described his all-round set of attributes as being “stunning for an NQSW”.

This was a standout nomination and social work values were clear throughout. Jamie is someone who gets the Mental Capacity Act and human rights and applies them to help people lead better lives. A joy to read.

Jamie is reliable, timely and has authority whilst supporting team members. He clearly strikes a great balance between being knowledgeable and authoritative and meeting service users’ needs.

Jamie clearly prepares very well for case discussion and is rightly confident in his own practice skills and abilities. He brings these to bear in helping other colleagues, partners and of course service users, especially with complex cases and safeguarding issues.

All who have encountered Jamie have not only made positive comments about his enthusiasm, his intelligence and his industriousness, but also about his demeanour and self-presentation. He is kind, helpful and supportive and never makes people feel that they are asking too much. Jamie is an asset, not just to our Team, but also to social work.