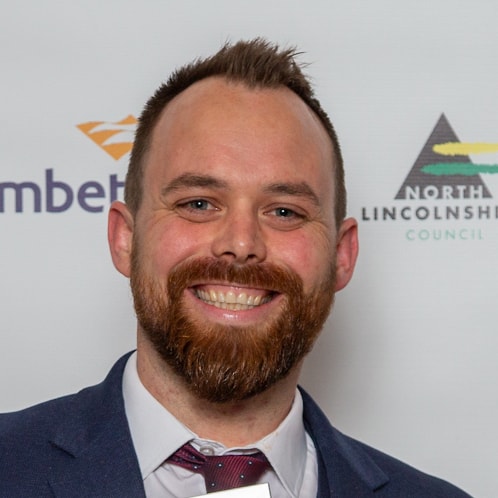 Social work runs in the family for Dan Grimes – his mum is also a Cambridgeshire social worker – and this influenced his aspiration to work alongside children and families.

After completing a criminology degree, he took up a youth worker post in Cambridgeshire’s Early Help service, before moving into Education Welfare. But motivated by the desire to make a real difference, he decided working in safeguarding was the best route for him.

In his current role, Dan recognised that there were a large number of families known to the service who were struggling to understand why social care continued to be concerned about their children and he has worked to address this. His upfront and honest approach has yielded positive results, with one example being his work to support a service user to leave an abusive relationship, which she remains free of and is now thriving with her baby.

Dan works in a busy frontline team, which is holding higher cases following a restructure. But despite this, he also volunteers for Cambridgeshire’s ‘Siblings Forever’ programme, which supports siblings in care to spend time together. He is known for having an “infectious enthusiasm” for his work, which significantly contributes to his team’s morale.

Dan demonstrates great communication skills with everyone. I think it’s great that Dan is not afraid to challenge the system and advocate for what he thinks is right. This is more of a rare trait but ultimately it allows for improvement and change.

Experience in youth work and strong social justice underpinnings. Noted that able to connect with families and help them understand concerns early in the involvement. Goes above and beyond.

My 11-year-old son never used to listen and we have always had female workers. My son seems to be listening to Dan. This might be because he’s a man but my son seems to look up to him and is listening a lot more when Dan speaks. Dan regularly checks up with me to see how things are going and has been to meetings – he doesn’t just leave me to it. It’s hard to hear what he has to say sometimes, but then I know I need to hear it.

Feedback from someone supported by Dan

Dan’s enthusiasm for the work is infectious, he has a positive impact on his colleagues and is a significant contributor to the good team spirit/morale. Dan is always willing to volunteer for tasks, including new areas of work, which he views as learning opportunities. His practice is more advanced than what would be expected from an ASYE social worker.