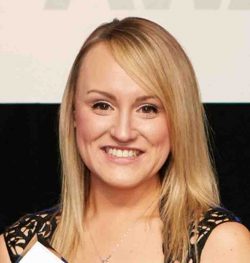 Stephanie was a standout winner for the judges and it’s not difficult to see why. Since joining Rochdale Borough Council in September 2014 she has been assigned a series of complex cases that would have proved testing for any practitioner, let alone a newly qualified worker. But she has approached them all with the same enthusiasm, confidence and integrity.

One notable example is when a service user on Stephanie’s caseload disclosed that she had been abused by her foster carer. This case was emotionally challenging for all involved but Stephanie persevered and has been successful in helping the young person to open up about her experiences, rebuild her self-esteem and begin to trust those around her again. The positive impact Stephanie had on this service user was evidenced in a moving testimonial, which described her as “one of the best social workers you could ever have”.

She has a real talent for establishing rapport and relationships with young people, even in the most difficult circumstances, and the judges praised her for always asking the question: “Would this be good enough for my child?”

Stephanie is very child-focused and has worked on a raft of complex cases. It’s brilliant to a newly qualified social worker doing so well in Rochdale.

Stephanie is very child-focused and I really liked the fact she is asking the question ‘Would this be good enough for my child?’ Children are obviously taking to her.

Stephanie’s level of development and learning is beyond that which a significant number of social workers achieve in a relatively short period of time. She is an asset to Rochdale and to the children she supports.

Stephanie is a kind and warm-hearted woman who would always be there no matter what. In my opinion she is one of the best social workers you could ever have.