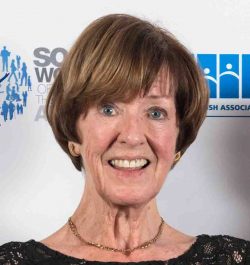 “Emotional reading” was the phrase used by the judges while considering Maureen’s entry. Her nomination included 17 incredibly moving testimonials from past service users and colleagues – a sign of just how valued and well-respected she is.

After starting her career as a social work assistant in Southwark in 1977, Maureen spent her life working with children and families. From the outset she had an ability to connect with children of all ages and temperaments in a way that others could only emulate. “I have watched their bodies relax and frozen faces become animated,” are the words of one former colleague.

While working at the NSPCC, Maureen developed communication tools for abused children and raised awareness of the need for a more child-focused approach for young witnesses during court proceedings. She also assisted the Metropolitan Police with complex investigations, enabling young people to speak out about the abuse they suffered. Her work earned her a Commissioners Commendation.

Maureen has now retired after losing her voice to Motor Neurone Disease. Her gift with children has not wavered and she recently worked with a group of school pupils at St Christopher’s Hospice to reduce their fears about death and terminal illness.

Maureen’s entry was wonderful, she’s incredibly inspirational. She’s made a huge difference to so many people’s lives. You can’t fail to be impressed by her work and achievements.

In my career I have managed and taught many social work students and practitioners, but none ever come close to the qualities, professionalism and care of Maureen.

The truly magical way Maureen can put a smile on your face, even when it is the last thing you feel like doing, has continued to amaze me as the years have gone by. She gives so tremendously and effortlessly; she is a very special lady.

Children are drawn to Maureen – she understands them, calms them when they are frightened and alone and knows just how to be with them to make them feel safe and cared for.